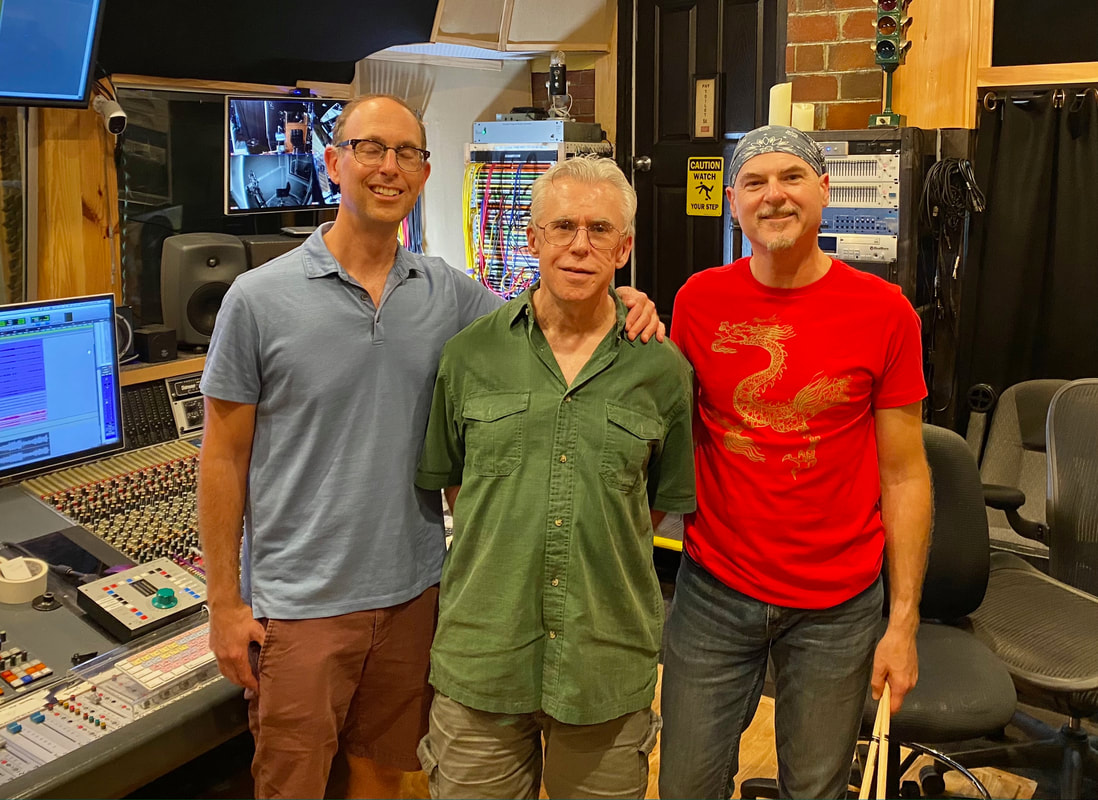 It was a musical experience that was highly rewarding, recording with Bob Himmelberger and Dave Kingsnorth was the first time I really, truly enjoyed a record date.  After studying piano with Bob for a few years, I began playing drums in his  trio.  And after another couple of years, Bob gathered up 15 of his best tunes and we spent a day just jamming on them, taking liberties and having fun.  Bob will release this album, "Legacy" in the Fall/Winter 2022/23.  Can't Wait! 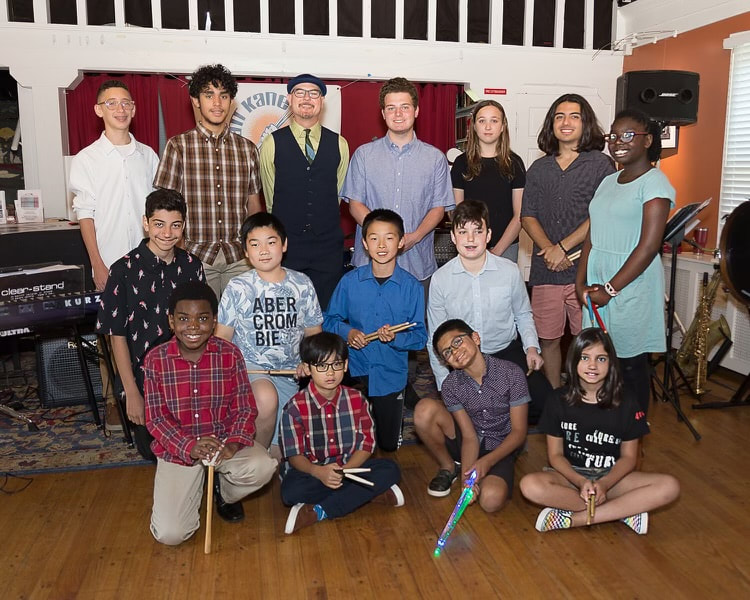 The Matt Kane School of Drumming celebrated our 10th Annual Day For Drummers show.  Four of our seniors will be attending college next year at:  UCLA, U of Texas @ Austin, North Carolina State, Ramapo University.  Our own, Casey McNeil, earned a full ride music scholarship to Ramapo.
All students performed great and the show was a massive hit with parents and students.  Thank you all! 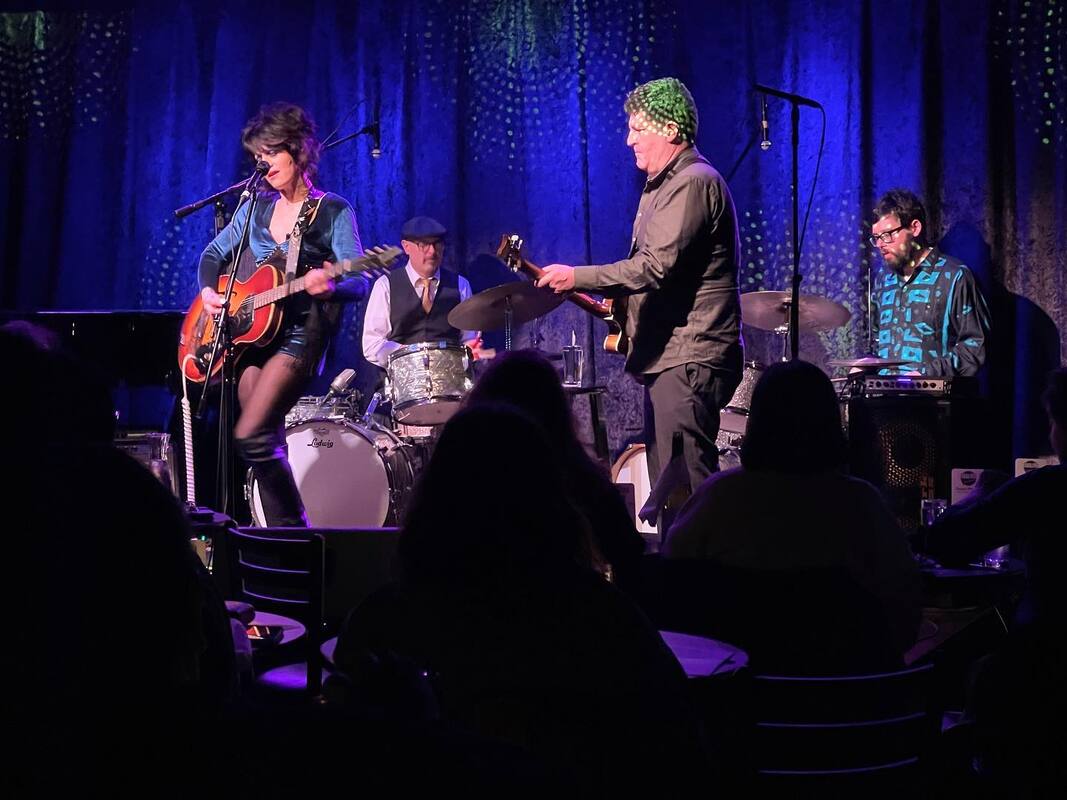 How to describe this band?  It's like no group I've ever been a part of, I can say that for sure.  Two juxtaposed drummers, one legendary bassist and one singularly amazing vocalist, songwriter, guitarist and bandleader.... that's a start.

For the past 20 years, I've been collaborating with Sasha Dobson.  We've literally played hundreds of gigs together, many of them we played as a duo, working through Sasha's original songs.  As time went on, we found a pocket for the songs and also a real open interpretation of the music, a sort of acceptance of the songs being different from gig to gig.  The door is always open for something different to happen, without the music ever being compromised.  It's a rare musical relationship that we've cultivated just thru playing a lot, growing into ourselves and growing into the music.

Last summer we had the opportunity to play a residency in the Rockaways with the fantastic Tony Scherr on bass and it opened the music up to an exciting dimension of improvisation and feel that elevated the vibe we already had to something completely different... I dare say euphoric.  The gigs were that good.

Recently we performed two sets at Birdland as a part of Sasha's three night residency.  In addition to Tony Scherr, Sasha's brother, Smith Dobson, joined us on drums for a double drummer night.  The first time I've ever played a gig with another drummer.  Interesting! 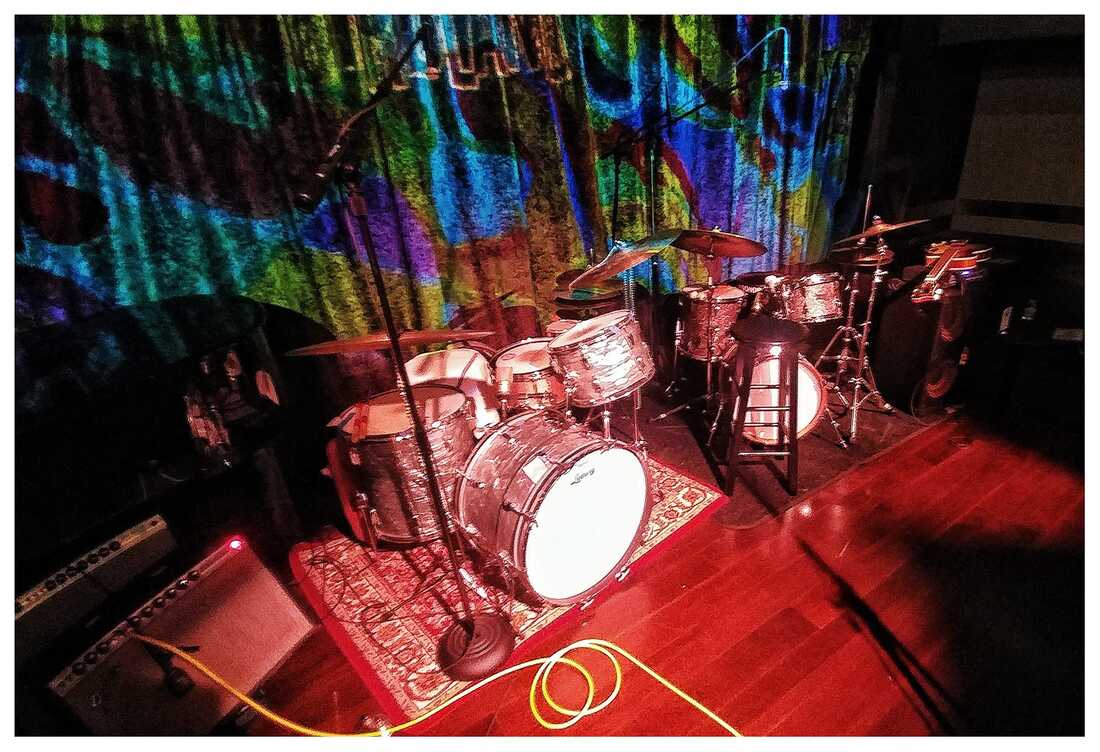 The result was really, really fun and musically satisfying.  The layers of sound and rhythm that Smith added gave the band a sonic dimension that I've never experienced before.  Smith Dobson, I have to tell you, is one amazing drummer and just plain fantastic musician and good natured dude.  The sense that he brought to the music was so unassuming and chill, but very much present and energetic.

This was one for the ages and thanks to Sasha's hard work and prep, the show was recorded  and filmed.  So there will be content to come, we're very excited to share it.  Keep an eye out, I have a good feeling about this group and I think there will be more dates in the near future.  Thank you Sasha, Tony and Smith and the wonderful Birdland staff! 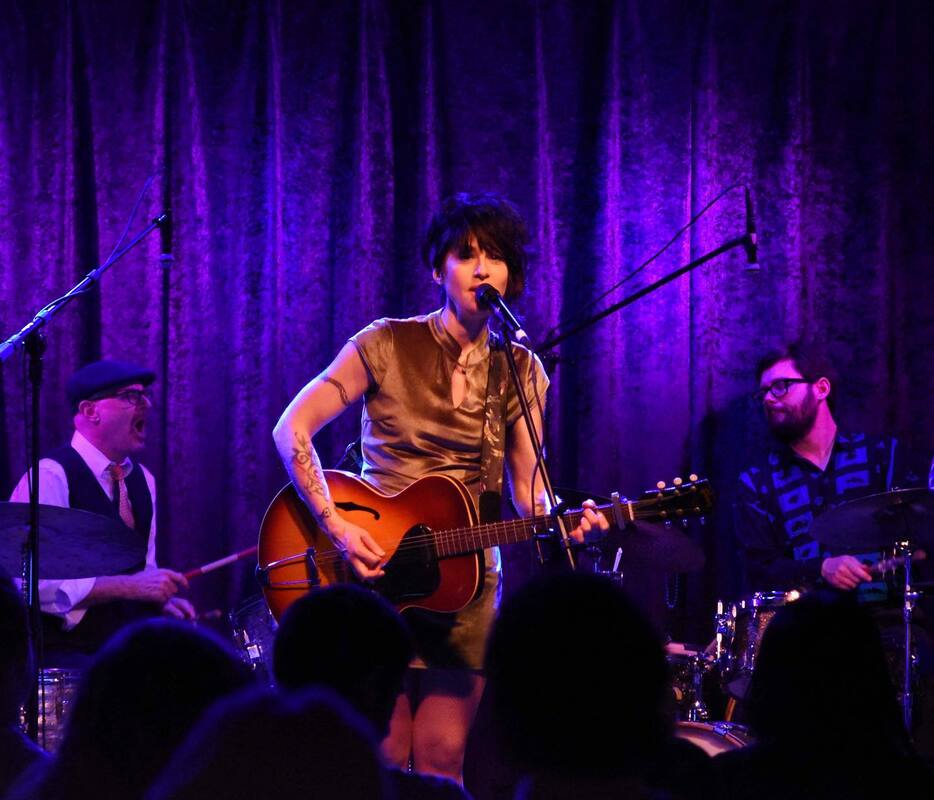 Matt's original song, "Eureka Springs" has recently been featured on KXPR radio's "EXCELLENCE IN JAZZ" series.  The song's title comes from the small village nestled in the Ozark Mountains, Eureka Springs, Arkansas.  "Way back in the 90s, I played the Eureka Springs Jazz Festival with Ahmad Alaadeen's band and we had a real blast.  The townsfolk were really cool people and it felt like the aura there was charged with good energy.  I went back to KC the next day and wrote this melody."
The song is from "The Other Side of the Story" which features Vic Juris on guitar, Peter Schlamb vibes, Klaus Mueller keys, Mark Peterson bass and all original compositions of Matt Kane. 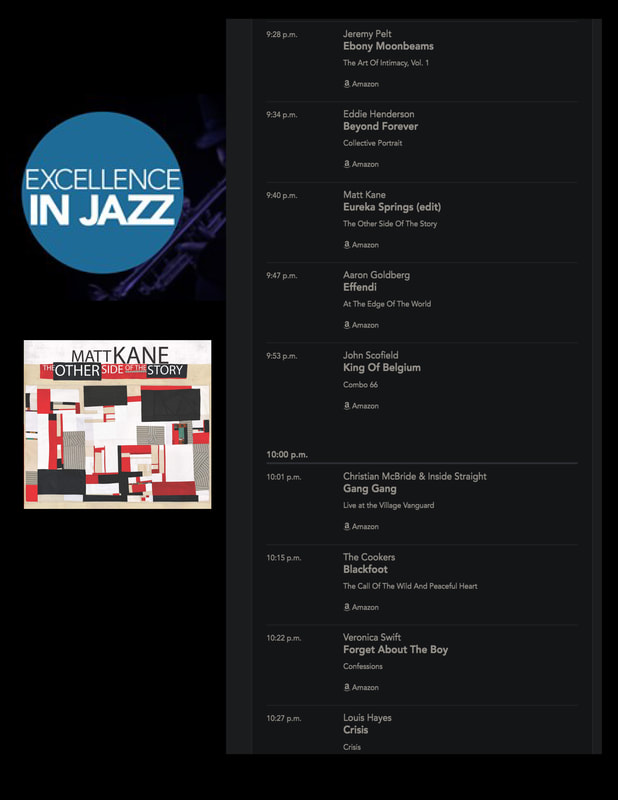 Since the pandemic loosened it's grip a little bit we've been working with this trio at Van Gogh's Ear, cultivating a nice group dialog and working on original music for the next album.  I can't say enough about Yayoi and Steve, they really hit it off and work so well together.  That's part of the reward of being a bandleader, when you put great musicians onstage and they exceed your expectations and the music elevates beyond where you thought... that's why we do this. 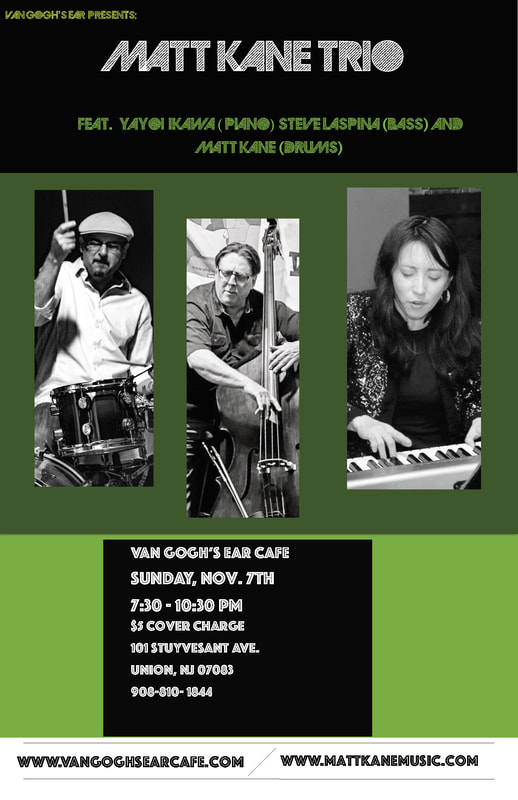 Matt was featured by the Kansas City Jam Magazine.  Read the full article in the "press" section. 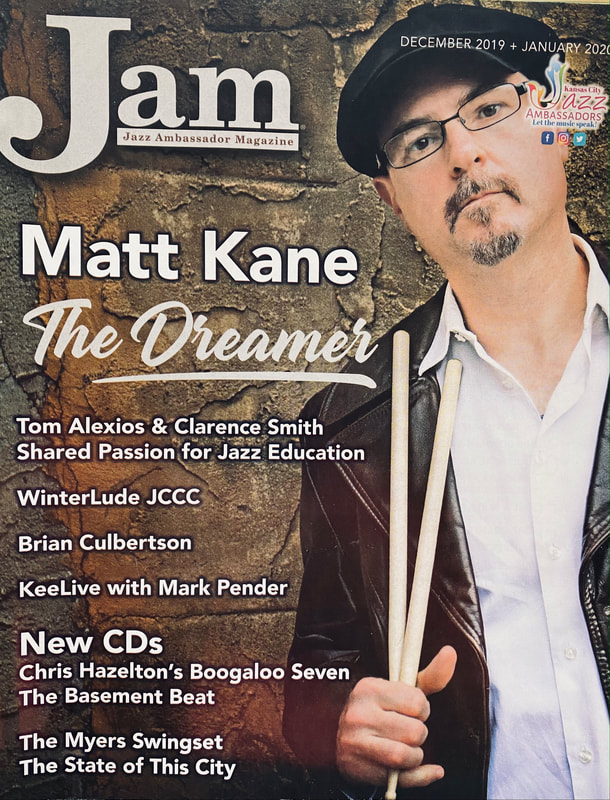 I became an endorser of Canopus drums in 2011.  A great drummer, Eliot Zigmund (of the legendary Bill Evans Trio) and I were talking one day in a drum shop in the Bronx and he recommended them to me when he saw that I was fussing with an old vintage set of Sonor drums.  Eliot connected me with the artist relations rep and I joined the Canopus family.  My choice was the Neo-Vintage M-1 kit w/ Maple/Poplar shells.  I have two snares:  a 5" and a 6.5" deep.  Of course, I use their accessories:  speed star bearings, bolt tight washers and the legendary vintage brass snare wires.  Musicians search for their sound, sometimes for decades.  I'm happy to have found my sound and to work with the best family of craftsman in the world. 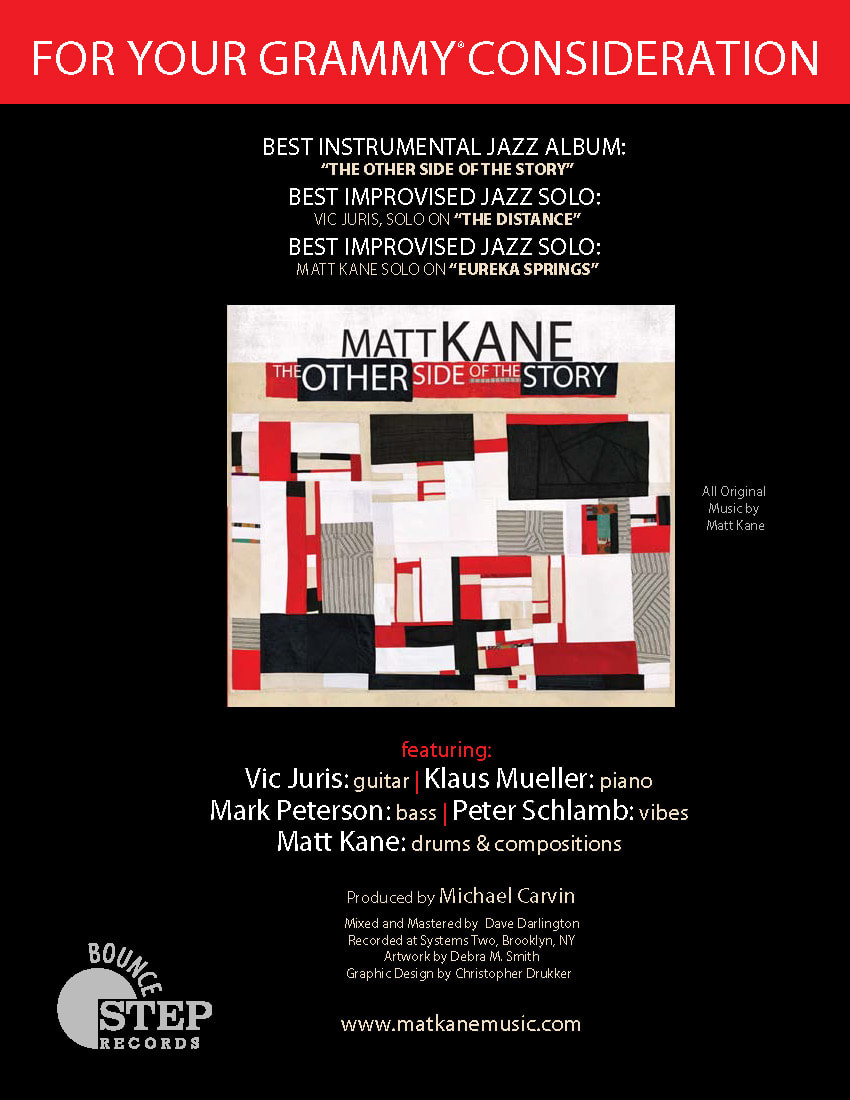 "The other side of the story" continues to roll on the radio!
​Featured at #11 on NPR station Kmuw wichita... 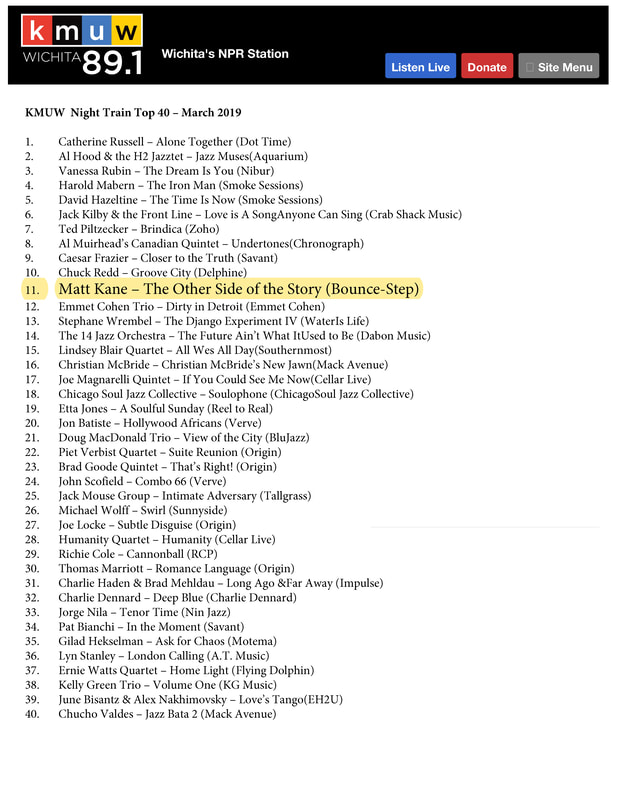 New album "The other side of the story" on the charts Four months and counting... 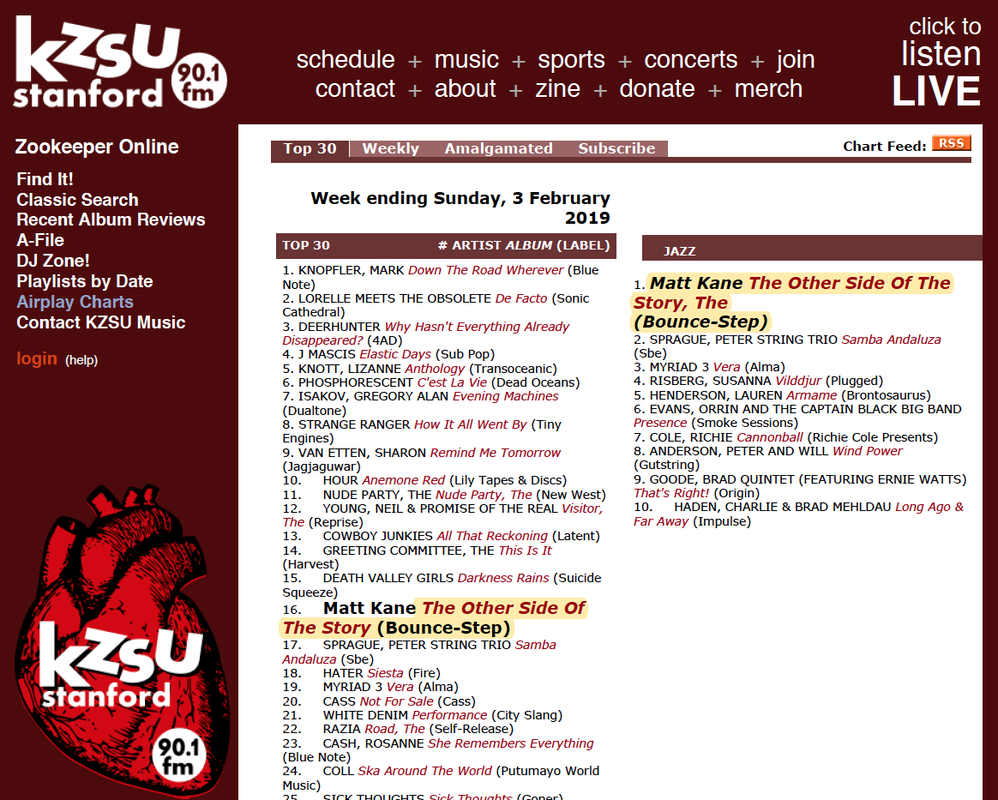 "THE OTHER SIDE OF THE STORY" KEEPING GOOD COMPANY AT #15 ON THE CHART.... CHECK IT OUT! 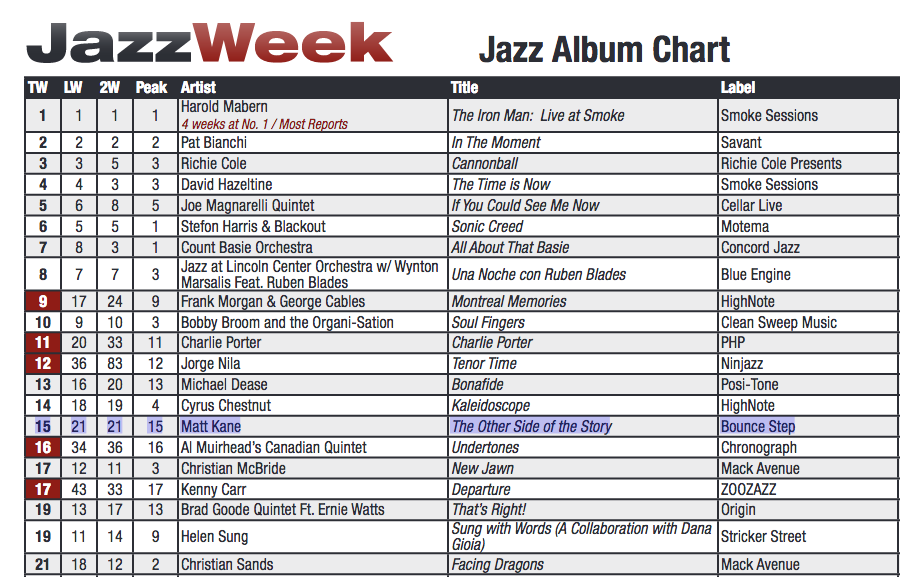 "the Other Side of the Story" featured soul and jazz..." 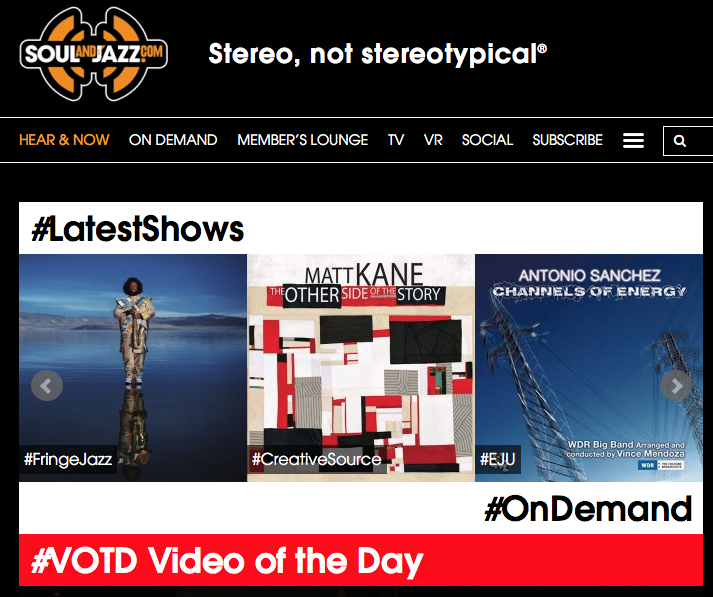 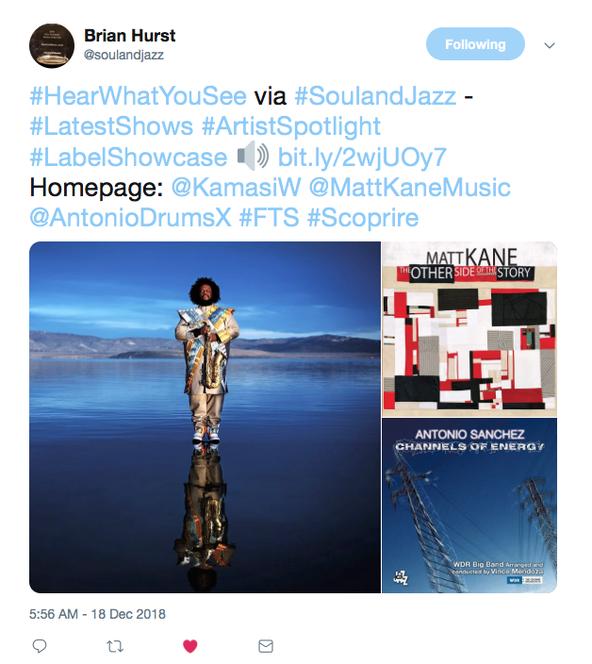 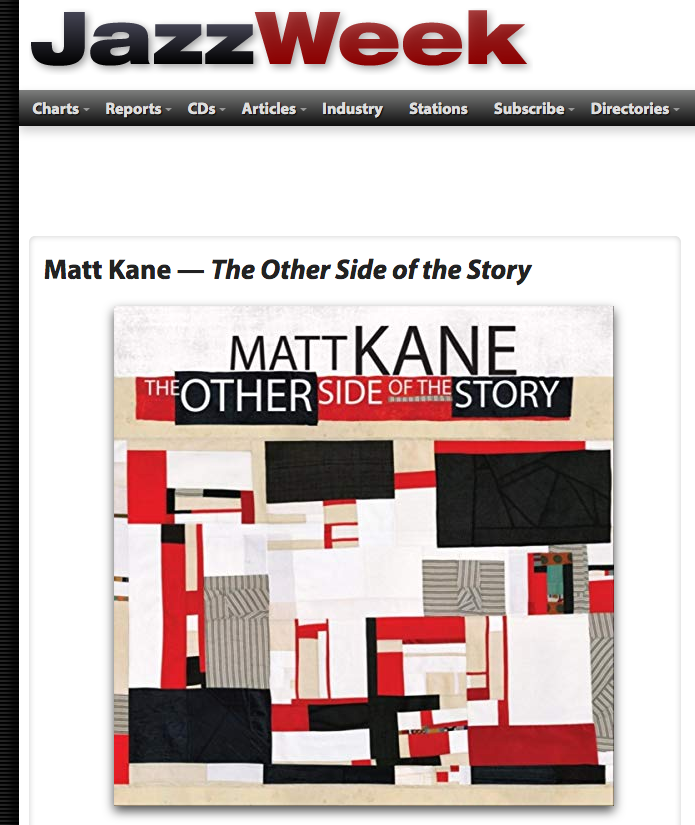 Chart success! "The Other Side of the Story" moves up on the JazzWeek chart to #43!

WBGO is the first radio station to debut the album WORLDWIDE on their "Radar" series.  Check it out...
​www.wbgo.org/post/hear-upbeat-new-album-drummer-matt-kane-other-side-story-radar 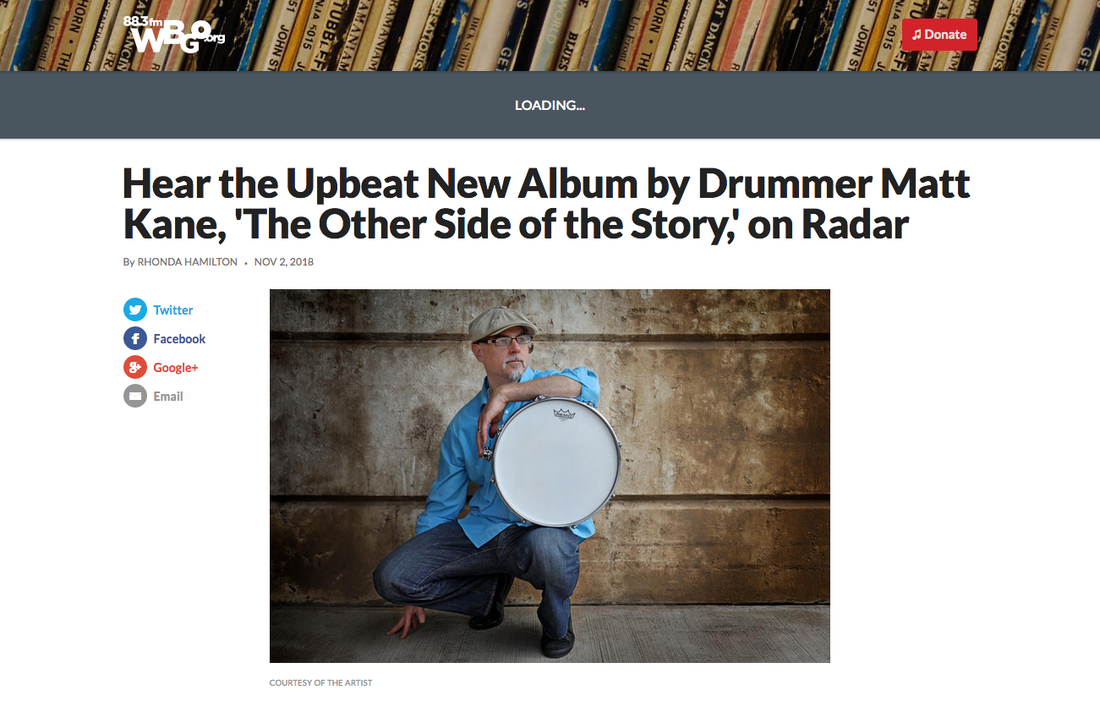 The Other Side of the Story is drummer Matt Kane’s third release as a leader, but the first to showcase his talent as a composer.
Kane was born and raised in Hannibal, Mo., and since moving to the New York/New Jersey area in 1997, has established himself as a highly accomplished drummer as well as a skillful and effective educator. From the first track here, you know you’re in for a tuneful, upbeat experience.
“Eureka Springs”— inspired, Kane says, by “a little village nestled in the Ozark Mountains of Arkansas,” is “actually the first jazz song I ever wrote.” He also plays guitar, and you can hear the influence of Pat Metheny on several tunes, including “Ozark Flight,” which feels like fresh air.
Toninho Horta is another one of Kane’s favorite guitarists, and his solo piece, “Vista,” was inspired by Horta’s chord voicings. “Hannibalian” reflects Kane’s idyllic Missouri childhood. It’s a lively tune that evokes images of kids growing up along the Mississippi River, fishing and playing in cornfields.
“The Distance” was composed in New York City in the aftermath of 9/11. Kane thanks his mentor and producer, drummer Michael Carvin, for an arrangement which helped to convey the meaning of the composition. He also credits Carvin for his assistance in conceiving this album, and for adding an intensity to the project.
Kane chose the great guitarist Vic Juris to help translate his musical vision: “Vic’s experience and sensibilities were perfect for my music, especially since I wrote most of it on guitar.” Kane also surrounded himself with some old friends, including vibraphonist Peter Schlamb, whom he met during his days in Kansas City; pianist Klaus Mueller, a fellow New School alumnus; and bassist Mark Peterson, a fellow Missourian.
With his new release, Kane wants to present the other side of his story as not just a band leader, but as a composer of his own music, reflecting his personal experiences and growth as an artist. He says: “Out there in the Midwest, people will hold the door for you. I want to hold the door open musically for my audiences and let them in.”
That’s exactly what he has done. The Other Side of the Story has a big welcome sign on it. Matt Kane reveals the other side of his story, but he’s nowhere near the end of his tale. There are many more chapters to come, including performances Nov. 8 at The Fox and Crow in Jersey City, N.J., and Nov. 16 at The Old Franklin Schoolhouse in Metuchen, N.J.     - Rhonda Hamilton, WBGO 88.3 fm

"The title of Matt Kane‘s fourth full album release as a solo artist is "The Other Side of The Story," but could easily have been dubbed "Kane Style".
This album again represents another evolutionary step for this jazz drummer that came from Midwestern beginnings in the land of Mark Twain dreams in Hannibal, Missouri into the jazz dream world of New York City. The cascade of sound on this album is akin to a personal narrative of his life as a musician that has traversed both geography and hard work. With firm Kansas City roots as a part of a mature music backbone, he has spent quality time writing his own novel with the help of master mentor Dr. Michael Carvin, who was behind the scenes on this project. In turn, Mr. Kane has become a influential teacher and player to legions of young jazz cats out there in cool land. This new project will have listeners enter a realm of 'repeat & shuffle'. Meaning, you will want to listen to this album over and over again and shuffle your brain into the thought of what could be next for this talented modern-day drummer that continues to add to his jazz force in modern music."
​-Joe Dimino of Neon Jazz

New video: start of the change

NEW ALBUM "THE OTHER SIDE OF THE STORY"
is out now!

In October of 2018 I will release my third album "The Other Side of the Story"
​FEATURING:
Peter Schlamb: vibraphone and electro-vibes
Vic Juris: guitrars
Klaus Mueller: fender rhodes and piano
Mark Peterson: basses
Matt Kane: leader/composer/drums

Matt will be conducting a drum clinic at Explorer's Percussion on Tuesday, October 23rd, 2018 at 6:30pm.
The Clinic is sponsored by Canopus Drums.  Kane will relate his 32 years of professional experience as a drummer, bandleader, teacher and mentor.  Topics include: rudiments and mastering the snare drum.  Opening up the rudiments on the kit.  Getting a full sound.  Serving the music.  The title of the clinic "Spirit of the Drums" explores the "Why" of what we drummers do. 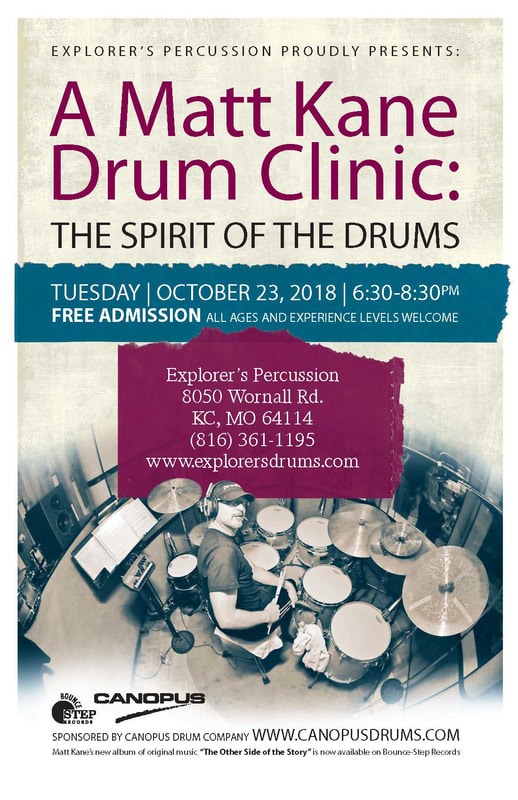 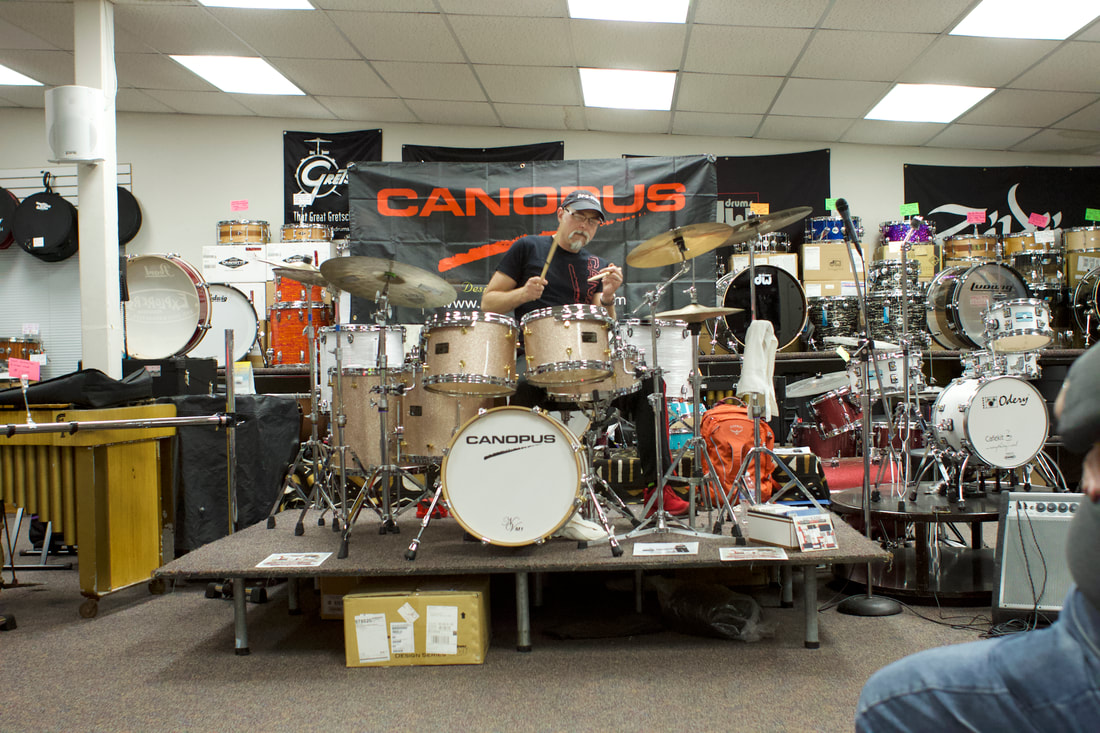 The jump rope has been a true savior in my life, helping me come back from injuries and other set-backs.  I have used it to keep sharp and rhythmically in tune.   The jump rope is a highly effective and optimistic exercise.  I created my own jump rope music to train with and it's called "Progressive Jump Rope".  Check it out!

Matt Kane endorses Canopus and Beato and is a member of the following organizations.